The world scale override can be used to change the relative position of the eye cameras (also known as the Inter-Camera Distance, or ICD). This can affect your perception of the size of the world in VR. Reducing the scale (ie: a scale under 100%) will make the world appear smaller, while increasing the scale (ie: a scale above 100%) will make the world appear bigger.

Previously known as “prediction dampening” this setting allows to reduce the jitter that can be observed when head or controller is predicted “too long in advance”. This often manifests as “over-sensitivity” with your head movements. For example, some people have reported the view in the headset shaking with their heartbeats. That is an example of over-sensitivity. Set a negative value to reduce the amount of prediction and reduce shaking, for example -50% will cut in half the requested amount of prediction. Experimentally, best results have been achieved with values between -20% and -40%.

The OpenXR Toolkit applies some simple post-processing to adjust the brightness, contrast and saturation of the images displayed in the headset. The way these settings affect the image is comparable to the settings found on your TV or computer monitor. They are applied on the rendered images as a whole, and are subject to limitations due to color encoding.

Each setting has a default value of 50, which means no changes to the game’s output. The saturation adjustments can be applied to all 3 color channels (red, green, blue) or individually for each channel.

Note: This is a highly experimental feature. If it makes your game crash or misbehave, please disable it.

Turbo mode can increase your frame rate under certain conditions, but there is no rule or guarantee.

Turbo mode can also have undesired side effects:

Note: Turbo mode is offered as-is. There will be no support for issues filed while using Turbo mode.

If set to Default, the Motion reprojection setting in OpenXR Toolkit does nothing, and the setting from OpenXR Tools for Windows Mixed Reality is used instead.

This option can be used to throttle down the frame rate of the application and avoid fluctuations in frame rates. This option may introduce unwanted latency, since the locked frame rate might not properly phase with the scan-out of the headset.

The field of view override adjusts the pixel density per degree. A smaller field of view is covering a smaller region of the view but with the same amount of pixels, effectively increasing the perceived resolution. Two levels of controls are available: simple and advanced. The former adjusts the fied of view for both eyes simulatneously, while the latter offers individual controls per-eye.

In order to activate this feature, you must check the Enable screenshot box in the OpenXR Toolkit Companion app, and select an image format for the screenshots. The OpenXR ToolKit supports the following formats: DDS*, PNG, JPG and BMP.

You may then press Ctrl+F12 to take a screenshot of the left-eye image view. Screenshots are saved under %LocalAppData%\OpenXR-Toolkit\screenshots. This folder may be opened from the OpenXR Toolkit Companion app by clicking the Open screenshots folder button. 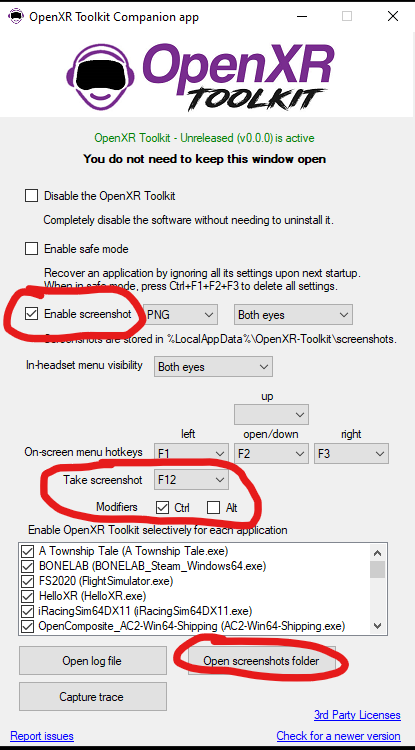 *The DDS format is a lossless format native to DirectX but some tools might have issues opening DDS files. The tools that were confirmed to properly open them with the OpenXR Toolkit are GIMP and Paint.net

This option can be enable to continuously record some statistics from the application to a comma-separated values (CSV) file stored under %LocalAppData%\OpenXR-Toolkit\stats.

The CSV file contains rows with the average FPS, frame times, and VRAM utilization over one second. Every second, a new row is appended.